100 Years of the Republic – 100 Years of Electorate Dynamics
On the trail of swing voters in an overview of all National Council elections
The first elections took place 100 years ago in the Republic. On the occasion of this anniversary, the SORA Institute together with the House of Austrian History offers new insights into the electoral behaviour of the First and Second Republic.

Following the election of the Constituent National Assembly on February 16, 1919, there was a total of 26 national council elections – four during the First Republic and 22 in the Second. A first overview of election results since 1919 shows that the number of eligible voters has almost doubled in the last 100 years from about 3.5 to 6.4 million. At the same time, the proportion of non-voters has steadily increased. Over time, the party landscape of the Second Republic has also increasingly changed, as it moved away from two major parties to a diversity of parties. The proportion of swing voters also increased as a result.

While detailed analyses are available for current elections, which can then be used to quickly track where the voters for different parties come from, voter transition analyses are largely absent for historical elections.

For example, where did the voters of the Communists and Left Socialists go, parties that had won three seats in the National Council in 1956? And where did the votes for the FPÖ (Austrian Freedom Party) come from, a party that emerged in 1956 and immediately obtained six seats? Who were the voters that gave an absolute majority to the ÖVP (Austrian People’s Party) in 1966 and the SPÖ (Social Democratic Party of Austria) in 1971? Who had those people, who brought the Greens into Parliament in 1986 and the Liberal Forum in 1994, previously voted for? In 2013 there was the lowest rate of voter participation – which voters decided not to vote?

In a comprehensive research project funded by the Federal Chancellery, the SORA Institute reconstructed these missing data, which provide us with new insights into the democratic history of the First and Second Republic.

In an interactive digital module, not only is electoral behaviour made available, but also other basic data on the election, for example, information on all of parties, their top candidates, as well as photographic and video materials of election night.

This unique interactive overview of all National Council elections will be presented to the public on June 26, 2019 – as part of the opening exhibition at the House of Austrian History, and as a publically accessibly digital exhibition here on this site. 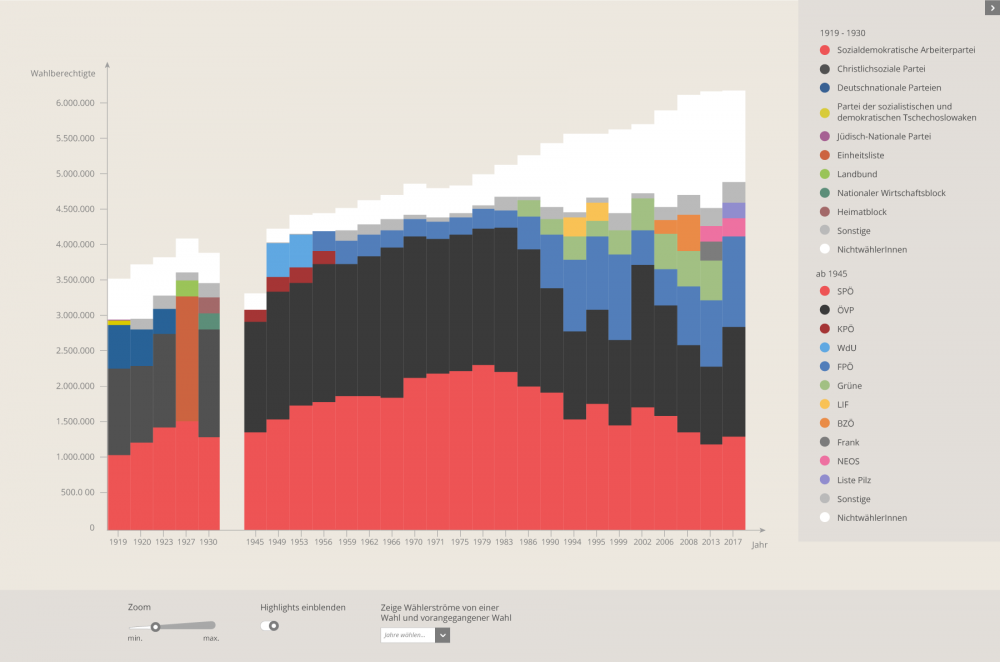